What an Odd Week

This week was so strange. Good and bad it was just really all over the place. Most of the stress and “bad” came from work – I can’t say too much about it but I’ve gone through probably the hardest thing I’ve had to go through so far in my career, besides when I was made redundant and sent home only to not find work for 6 months. I have been a people manager for a little over 3 years and I’ve definitely learned a lot from the experience, so I guess what happened this week was just another thing to tick off my list.

Since I started off the month with goals, the bad was compensated with good – on Monday I went to the gym (this wasn’t even the most stressful day) and it helped me tremendously to have a release – the pain in my neck and shoulders from the tension was beyond anything I’d felt before and for a short period, it was gone.

Tuesday was the “worst” day. I was all over the place mentally. I just didn’t focus well at all (and I found out later that this had a big effect on my work) because I knew I had to handle something major. By the time I got home, luckily the hubs had made dinner and I was able to put together my Wednesday blog post (see? I’m trying!).

Wednesday was aftermath day at work. It felt so slow and I was quite discombobulated again. I was tired and stressed and knew I had to just make it through the day. Once it was over with I left the office with my gym bag again, this time with my running gear inside. I changed at the station and hopped on a train home. Hubs sent me a message “I don’t think you’ll want to run, it’s raining.” I sent one back “please bring me my pink Nike jacket and my black cap, rain won’t hurt me.” And so he did. When I arrived it was in fact raining but I really needed that run. I ran more than I’d planned (5K), 7.5KM in total and the rain felt so invigorating! Call me crazy but rain running is just so refreshing and as long as there is no lightening and I’m properly dressed then bring on the precipitation!

On Thursday I worked from home. I needed to do complete my team’s performance evals and with everything going on in the office I had to have some time on my own to do this. First thing I found out in the morning was that something I *didn’t* complete on Tuesday morning caused a HUGE problem and delay with our financial year-end close. I know it’s ok to make mistakes, but I remember bursting into tears thinking “How could I be so stupid!???” I am glad that 1) my boss wasn’t cross with me for it and 2) it was solvable and didn’t have an impact on the actual close itself. But still. I hate that I let stress get the better of me and that it caused a huge issue. I worked quite hard on the reviews, but didn’t eat properly and then ended up eating stuff I wouldn’t normally have and consuming way too many non value added calories.

Friday was another day of fun. All those reviews I wrote? Now it was time to deliver. I admit that this is not my favourite part of the job, although some go very well and it’s good to have a dialogue, the ones that don’t go well are too close to confrontation and defensiveness. The thing is, I know it helps me grow, each time I get through it, it’s just, well, hard. I had my gym bag and I went again to the gym after work. It felt very good once again to get rid of some stress.

On Saturday I finally got some seriously needed sleep and eventually I went into town, alone, to attempt to go shopping. One thing I really would like is to stop looking like such a raggamuffin all the time. I just don’t like shopping, I do it terribly alone and I end up being really frustrated about the whole thing. I don’t understand sizing or styles at all. I don’t think that we as curvy girls should be stuck with the trends of the non-curvy girls. I ranted a bit about it:

I felt a bit better when the responses came in, especially that others know how this feels and that it has an emotional impact. I did end up with a few things and I may give it another shot next weekend. We’ll see. I want to say though, I don’t normally have a lot of hate for my body anymore, I HAVE come a long way from that, but seriously, I wish I could just have a better experience and I don’t think that any store out there will be catering to my body type, at least not a shop I can afford (and, I am sorry, but I don’t want to shop at the Fat City type shops. I spent years and years in those clothes and I feel like I deserve to have more choice right now – for those of you in North America, you have so much more choice; we have like 3 shops and that’s it!)

Today again I was able to sleep in, yay! I love it when I get to sleep on the weekends, it really makes up for the 6 hours per night I get during the week! I decided at 12 I was going for a run, and in true “It’s Me vs. Me” fashion it took me forever to finally get everything together to go and do it (2 hours):

(go see Thea if you haven’t yet, she is über-cool)

At 2pm I left with about 10KM in mind. It was a glorious day with the exception of two girls in a bus at the bus stop staring at me while I was getting sattelite on my Garmin and then basically sticking their tongue out at me when the bus finally departed, I felt good. (But really, WTAF was their problem??? No idea!) I wanted to run along the dyke and the farmland near my apartment and then go up to Velp (a couple KM away) near my old gym, then loop back around to my house (which is about 3.5KM from the gym). Somehow or another I took the wrong bike path which didn’t lead me to Velp at all… and I noticed I was already almost at 7KM so it was going to be at least 14KM total at that point (since, well, I’d have to turn around and go back). But the sun was shining and my legs felt great and breathing was good. The views were spectacular and I couldn’t help but just smile. I walked 1 kilometer at 7KM to take a few pics and drink some of my Fitmixer (which is amazing stuff you guys, and let me tell you I’m not getting anything for saying that and once mine is finished, it’s finished… I only have the sample given to me at Fitbloggin and I won’t be able to get any more here as they don’t ship internationally) before I headed back again. So basically my run was this: 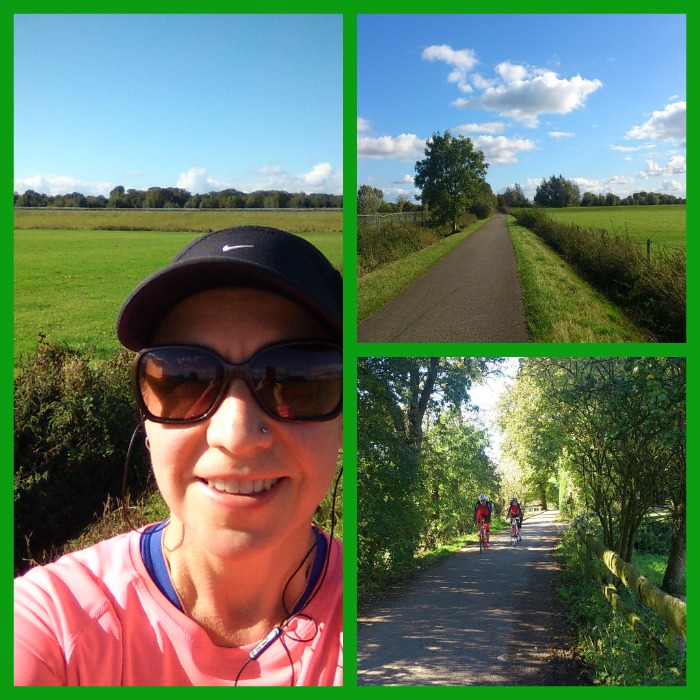 I could have gone on with my energy level the way it was but my feet were actually starting to hurt (I think I need different socks) so it was good that I arrived home when I did.

It was my turn to cook dinner, so while I was doing that I did three lunches up in the oven (post on Weds) and started making the enchiladas I promised the hubs. Somewhere around 45 minutes into cooking, my stomach really started bothering me. I posted on twitter and was reminded about chocolate milk. Unfortunately I don’t have a lot of milk products ever in the house, but I did have Turkish Yoghurt so decided to try that. It did help a wee bit and then with dinner it eventually calmed down.

At the risk of making this post even longer, I’ll just say that food was all over the place this week. I’m not sure why it seems harder to keep it under control compared to a couple months ago, but I just need to keep working at it. It is my goal to log every day and close out my food journal daily at MFP, even if I’m over in numbers, just to that I’m accountable and I did accomplish that this week but look at this:

Mind you the 1st is wrong, I’ve no idea why that happened –

Monday was total 1573 with 364 cals burned from exercise

Basically my goal for each day should be 1440 calories. This can go up if I work out so, fair enough, some days are higher. But some days are just really high, regardless. I want to fix that. I eat when I’m hungry so I tend to eat exercise cals (at least some) but this week has just been, well, a bit outrageous. Time to fix that.

So yeah, stress, food, exercise, a lot happened but a lot still needs to be done. Let’s see what the new week brings!

How was your week? Do you like to run in the rain? Do you eat your exercise calories or activity points?